The Disputed Election Results of 1876 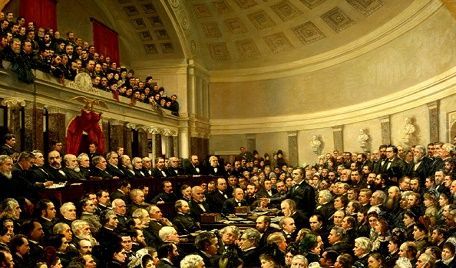 United State Senate
​The Constitution provided that “The President of the Senate shall, in the Presence of the Senate and House of Representatives, open all the Certificates, and the (electoral) Votes shall then be counted.” But whose vote would be counted, since both parties submitted Certifications with their candidate as the winner.

To resolve the issue, of who won the election, an irrevocably deadlocked Congress had to decide. The Democrat controlled House and the Republican controlled Senate agreed to appoint an Electoral Commission consisting of five House members, five Senators, and five Supreme Court Justices to determine who actually won the election. The Commission was composed of seven Republicans, seven Democrats and a mutually agreed upon independent, Supreme Court Justice David Davis. In the resolution creating the Commission, the only way to void their decision was a veto agreed upon by both chambers of Congress, which was not likely.

It was assumed the deciding vote would be Justice David Davis’. Had Davis actually served on the Commission it is likely that Tilden would have been given the state of Florida winning the election. However, prior to the Commission meeting, the Democratic members of the Illinois legislature elected Davis to fill an empty U.S. Senate seat assuming he would appreciate the gesture and vote for Tilden. This was a miscalculation on their part, because David accepted the position and immediately resigned from the Court.

His replacement, Justice Joseph P. Bradley, thought to be an objective non-partisan justice but a registered Republican, ended up voting party lines.
​The Commission heard testimony of fraud by both parties, and it became clear that, while Democrats had outpolled Republicans in those states, they also were guilty of intimidating thousands of black and white Republicans from the polls. Dead people voted, some people voted more than 10 times in multiple places; election officials tampered with voting ballots, and whites paid for black votes. Democrats requested a full investigation at the state level into the accuracy of the results. Republicans wanted the commission to accept the votes as submitted.

The Commission voted, on party line eight to seven, to accept the returns from the Republican polling board giving the Presidency to Hayes. Democrats threatened a filibuster but ultimately put their support behind the Commission decision, thus averting possibly another Civil War once an unofficial agreement, the 1877 of Compromise, was reached.  The Compromise agreed to withdraw Federal troops from the South, effectively ending Reconstruction, Southerners would be appointed to Cabinet positions, and internal improvements in the region would be supported by federal funds.